I was invited by a group to join their metal detecting dig in fields near Thruxton Racing Circuit. When I got there it looked like a nice pasture site, previously undetected. The only thing letting it down was the fine rain and cold breeze 😕 So waterproof coat on and start the hunt…

From the off there were lots of iron signals and a few either/or signals which sounded like iron but interesting enough to dig. What a surprise, the first nine inches of soil were light and sandy, a pleasure to dig after the hard clays I’m used to. Below the topsoil was the usual flints, and that’s where I was getting the finds.
Wandering along an old hedge line I dug an ‘iffy’ signal which turned out to be a deeply buried bent nail – but while I was digging the hole I found a large pottery shard which looked suspiciously like Roman Coarse Ware (but after cleaning I think it could be medieval – luckily I’m with Claire Pinder, the County Archaeologist, tomorrow so I’ll beg her to give it a cheeky I.D.)
The “definitive” answer from the experts is the large piece on the right is a piece of Roman sandstone roof tile, and the smaller piece on the left is classed as “CBM”, in other words they’re not sure what it is but it looks Roman so is called a piece of “Ceramic Building Material”
The nail I found in the same hole at the same depth definitely looks Roman though. 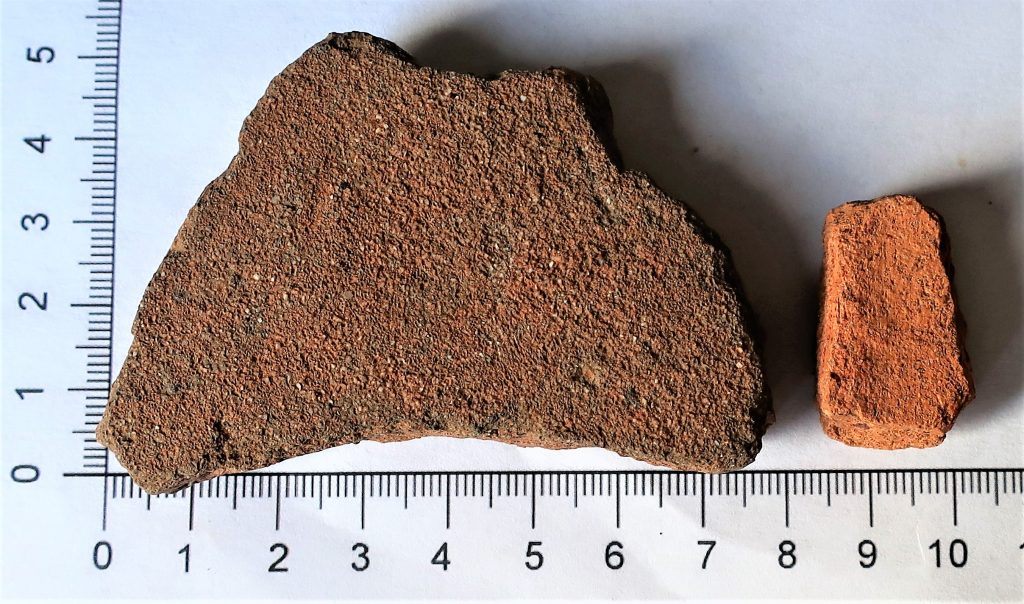 After digging a few more ‘iffy’ signals I only found a buckle and more bent nails, one of which I wrongly identified as a Roman Hobnail but after cleaning turned out to be an old cast-off horseshoe nail.

As I turned back to the car for a coffee break (it was raining again) I got a lovely sweet signal that I had to dig, whatever the weather. Not that deep I unearthed an almost perfect George V Silver 3d coin, dated 1916 – which means it’s 100% silver 😄 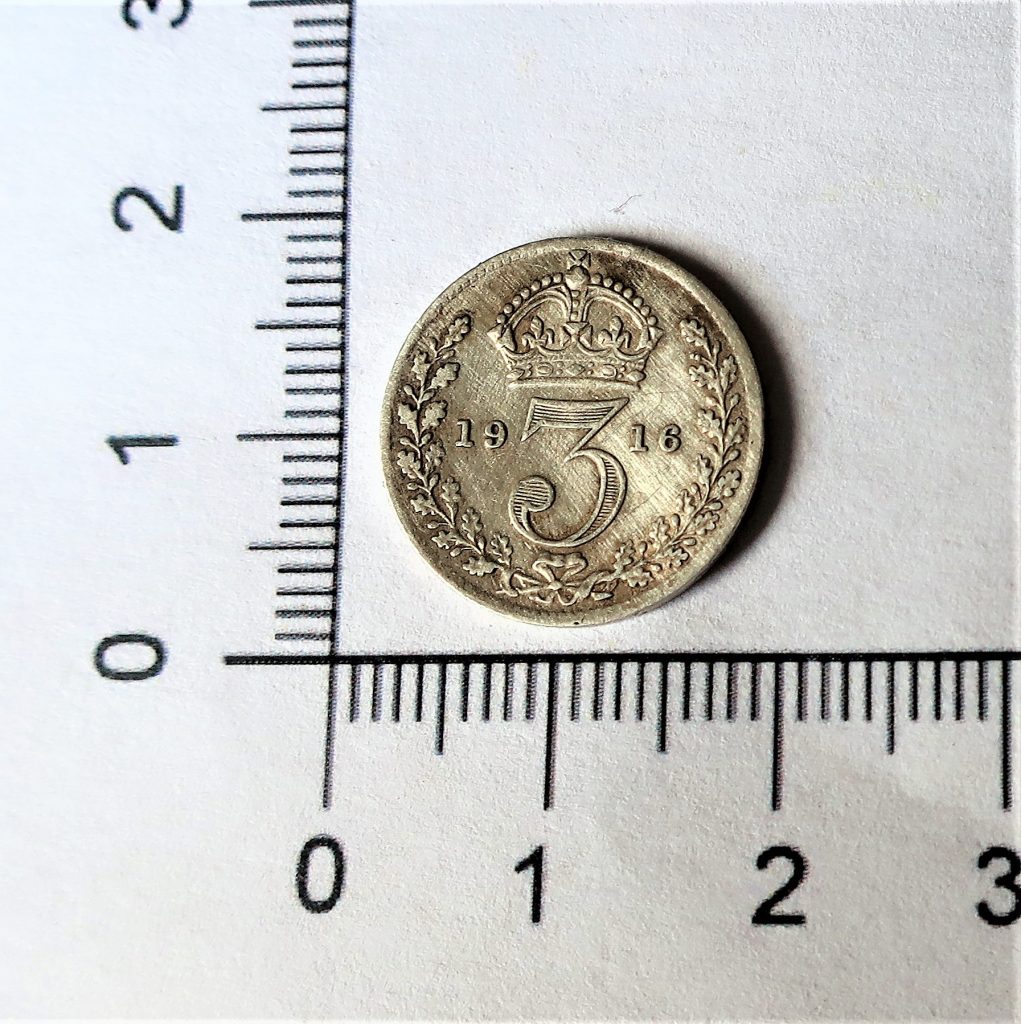 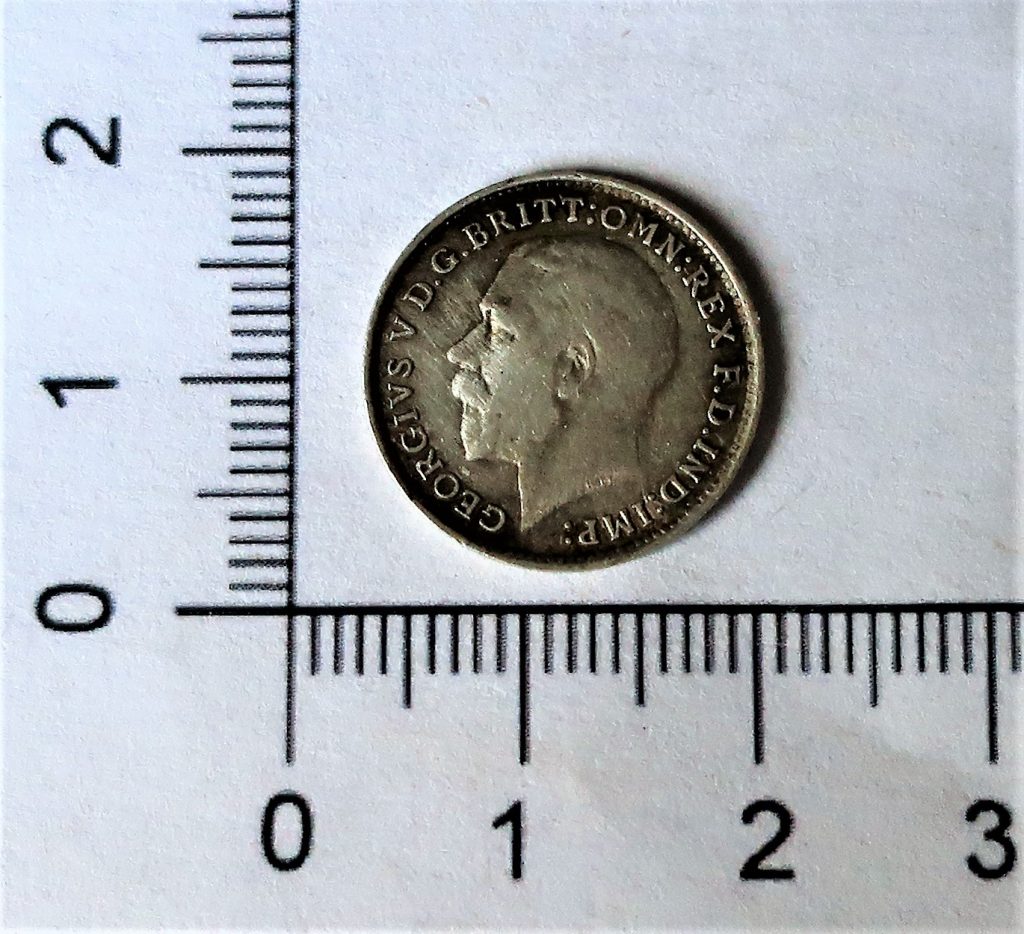 After a break, I headed for the second field, once again getting lots of iron signals and little else apart from another bit of roman-looking pottery.
Some of the other diggers had gone into a third field which was unmown and I’m sure we were told wasn’t part of the permission – but they were finding some nice pieces, coins and a pilgrims ampulla. Even so, I resisted the temptation to enter the field without permission so slowly headed back to the car, only finding more iron signals and two shotgun cartridge ends, side by side so probably fired from the same 12 bore. When I cleaned them one was made by an E Chamberlain of Andover (three generations of gunmakers 1883-1940) and the other by Cole & Son Gunmakers (registered in Devizes 1915), so not the usual rubbish “shotty”. 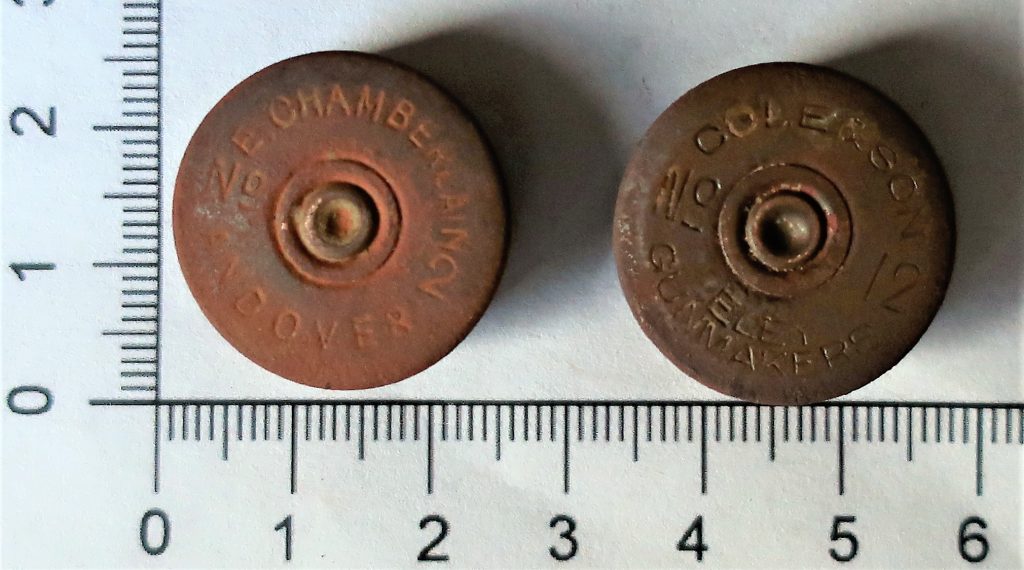 I was told later that over the old hedge line where I found the roman bits was a villa site. I wish I’d have known, I’d have put more effort into working the hedge area…