A highly enjoyable day’s digging today despite the flooded roads getting there, and the mud once I arrived 😁 Once again Malcolm, Glenda, and the crew had excelled themselves with the dig location, with diggable fields stretching to the horizon…

After the briefing, spoilt for choice, I headed for the first field on the right as it looked quite interesting – apart from my “bete noire”, maize stubble 😞 The mud turned out to be not that bad but the field was incredibly frustrating, and not just because of the stubble. The field was full of coke, something which the XP Deus doesn’t handle well, and I dug several lumps until I got used to the tone and graph on the remote, also the Ground Balance kept changing wildly from down below 60 to well above the 80s.
Despite this I was able to identify and dig small pieces of lead, bronze, an odd lead weight which is probably a medieval steelyard weight with an integral suspension loop, shotties, and small silver hammered which turned out to be a Charles I penny. 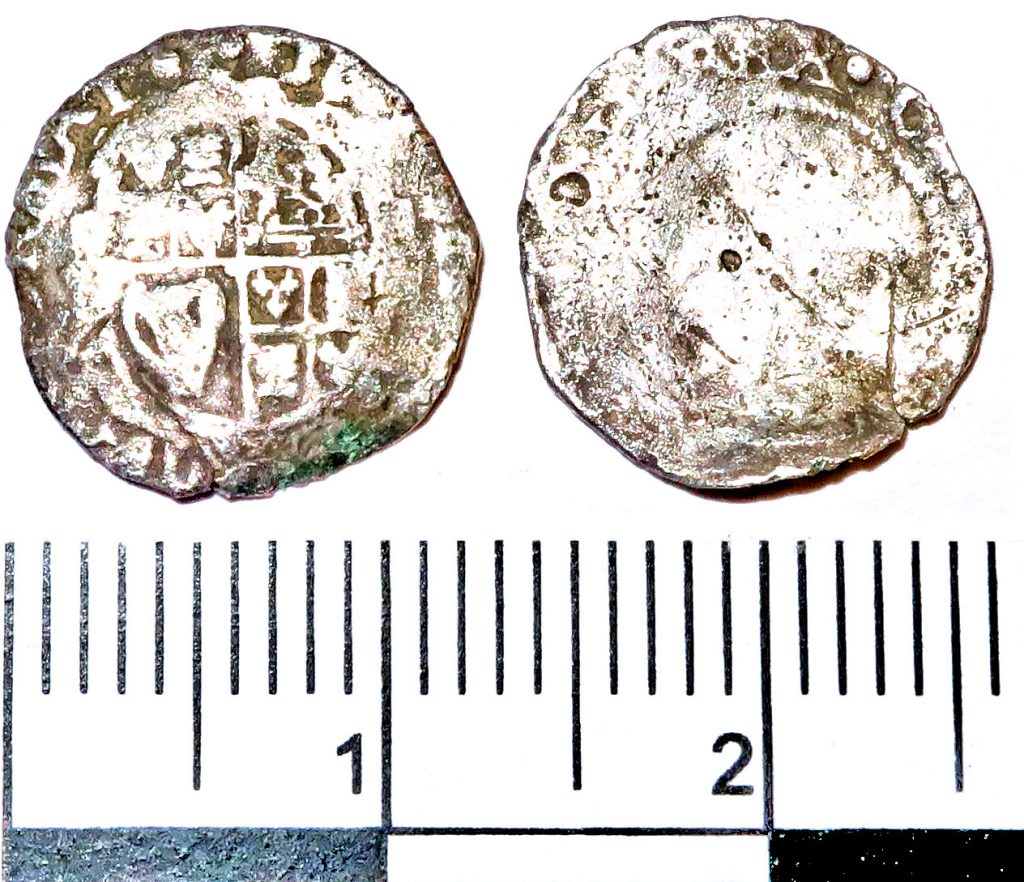 By the end of the field I was tired of tripping over stubble so crossed over into a second, seeded, field… Bliss 😁 No stubble, not much coke. I started off finding a few cow tubes whilst working my way along the top of the field then got a lovely signal, a Jeton – French “de compte au mouton” type dated roughly 1400 -1500 AD. 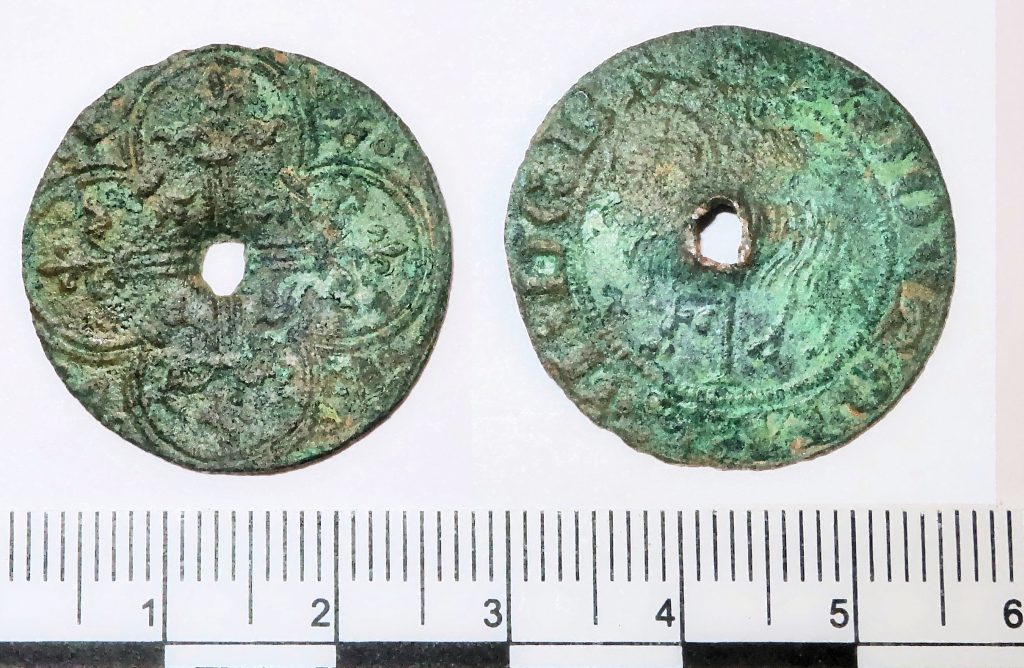 Now, where you find a jeton it often means trading took place, so you usually find hammereds too. I started gridding the area to look for coins then saw all the previously dug holes nearby – I’d been beaten to it 😭 However, within two metres of the jeton I got another signal which after checking is a 1300 – 1500 AD rectangular buckle with front constricted for a copper alloy sheet roller. 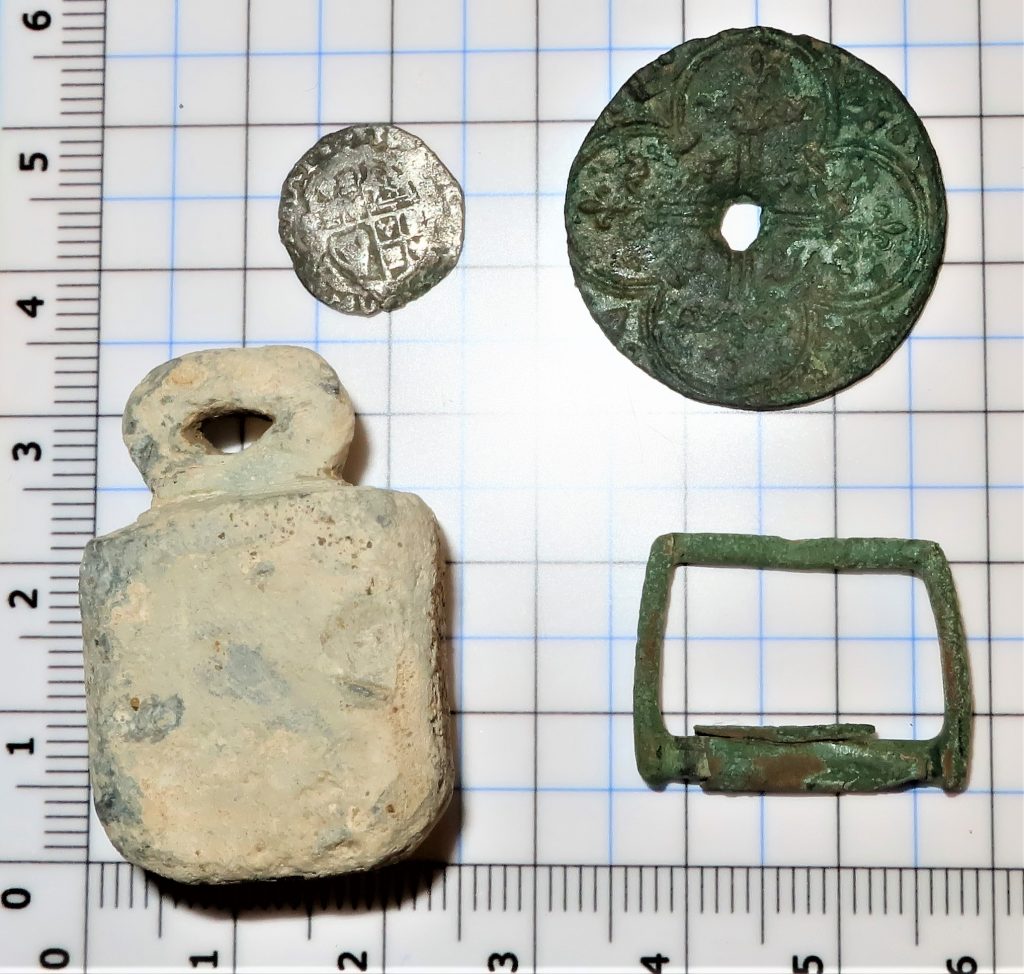 With that find I decided it was time for a break and headed back for coffee, cake, and the raffle. There were lots of great prizes and I really lusted after a few of them – but I didn’t win any of them 😭😭😭

However, I got something even better than a raffle prize. Malcolm decided I need a bit of a “thank you” for donating back the XP Deus I won on the Xmas dig then going home empty-handed. He’d noticed that I used a biggish, heavy spade for digging holes so instead he got me a fantastic Draper Stainless Steel spade, far better than my existing spade and much lighter to carry round the fields all day. To say I was “chuffed” with the gift was an understatement, I was over the moon. A very, very big thank you Malcolm.

It wasn’t much later that I headed back to my car for more coffee and a late lunch, eventually deciding that I’d done enough for the day, my painkillers were wearing off and my hip hurt. Time for home, shower, and some great memories 😁